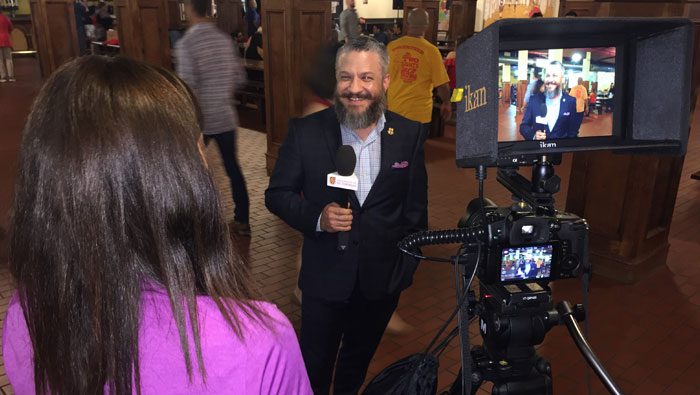 What is a Video Producer?

Behind every great video is an organized video producer who helped make the magic happen. While many people have no idea what a video producer actually does, a successful project usually can’t happen without one. A Producer is in charge of the video production, making sure every aspect turns out just right whether this is for a corporate video, a testimonial, or a training video. Producers must be organized and understand all the elements of video production. They must be cool under pressure, able to manage crews, and make people feel comfortable during interviews.

Producers wear many hats during every phase of video production.

Video Pre-production: The planning before you get started on a video project.

Concept: A producer will understand the goals of the corporate video, and what it takes to accomplish those goals. She’ll ask many questions in the initial meetings to make sure the story is being told. Bringing in a producer to the project often results in fresh ideas on how to approach the video.

Script Development: The producer will also storyboard the project and develop a video shot list, which is a list of all video elements needed to tell the story. For example: Close-up shot of attendee using program App.

Interviews: A producer is also in charge of arranging people for the interviews (or working with the client to select the interviewees) and writing the interview questions. Depending on the video, pre-interview calls may be conducted with the interviewees to get more background information and make sure the person is comfortable being on camera to tell his story.

Timeline: A producer has a thorough understanding of how long it takes to shoot each aspect of the video whether it’s an interview or a step in a process. Those unfamiliar with video production often think a “simple” scene can be shot in a few minutes. In reality, the “simple” scene may require several different camera angles and take 20 to 30 minutes to shoot.

Manages Crew: The producer will coordinate the photographers/videographers, the grip and other crew. She’ll arrange makeup artists and any other support staff that may be needed for the day including teleprompter operators or drone photographers.

Extra Production elements: The producer will help coordinate graphics that may be needed for the video project.

Client Communication: Your main point of contact during a video production will most likely be the producer. She will be the best person to answer any question you may have related to your corporate video.

Video Production Day: This is everything that will happen the day of the video shoot.

Set up: The producer will coordinate prep for the video shoot including everything from where to do the interviews and how the people on camera will look. The videographer also works hand in hand with the producer to pick locations for recording based on lighting and backgrounds available.

Interviewing: The producer will be the person right beside the camera asking the questions. She knows how to ask questions in a way that will make the interviewee feel comfortable. A producer is not afraid to get you to say something again or to correct you. Everyone wants the best outcome possible, and it is the producer’s job to makes sure that is the result of the interview.

Extra video shots: The producer will have a shot list ready to coordinate with the interviews and the topic to make sure the shots are done correctly. In most cases, when the person interviewed mentions something, there has to be video (or photos) to support what that person is saying.

Puts out fires: If any problem arises, the producer is the one who will help come up with a solution. For example, if an interviewee doesn’t show up or is running late, a producer will look at the schedule and determine what can be changed to be efficient with the shoot day.

Scripting: The producer will log or transcribe the interviews (type out words the people said in the interviews and what time it was said). She’ll then select best soundbites and write the script. The script will include both audio and video cues for the editor which includes where to put video and suggestions for graphics and other transitions.

As you can see, producers must have fast problem-solving skills, be creative, a good storyteller and someone who is great with people. Most all video projects need a producer to help make sure the video comes out like everyone wants. Houston-based VideoEnvy suggests using a producer for all projects, which helps the entire operation run smoothly and in the most efficient way possible.